Past Lives, Our Lives – Part I:
Why We Recall Certain Past Lives 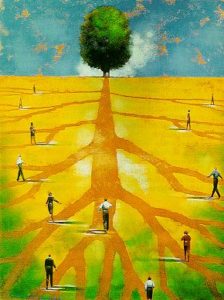 We are infinite spiritual beings on an eternal journey of growth and enlightenment. This I know…

One of my early experiences in which I was clear that I was more than just a corporeal human with a one-time shot at being alive on earth, was within a few months after my maternal grandmother passed away in 1974.  We called her Nana.  Her given name was Marion.  She passed away the day before her 77th birthday on February 17th.  I attended her viewing on my birthday the 19th.  I had envisioned her being the first one in the family to pass when I was 7 years old.   Of course, I had no idea when that would happen, and she was indeed the first in the family to pass when I turned 21.  She was, or should I say, is… dearly loved.  She was a small woman of strong character with a poignant dry sense of humor that slipped out on occasions that didn’t fail to surprise.

A few months after her physical death, I had an intensely vivid dream.  Nana’s body was laid out exactly as she had been in her casket wearing her little red suit jacket and skirt, white gloves, and a jeweled broach pinned neatly close to her heart.  She looked simply elegant, her makeup and hair done just right – her matching red lipstick applied to perfection.  But she was not in a funeral home in the dream.  Instead, Nana was on top of a stone sarcophagus inside an Egyptian burial site or pyramid.  There were flaming torches hanging on stone walls within the chamber so I could clearly see the artifacts all around her.

There were gold urns, vases and vessels, statues of Anubis and Isis, and many other beautiful artifacts of jewelry and hieroglyph tablets – all that were to be a part of an Egyptian burial to help accompany the deceased into the next world.   I got it.  It was Nana’s way of showing me that she had also lived an Egyptian life in a past distant time.  What was interesting for me was that I somehow knew I had some part of that past with her because it felt so deeply familiar to me. It wasn’t simply a dream – I was there.  And I also know it was her way of helping me recognize her as I knew her here, as well as begin to remember parts of my own journey leading to the work I’d eventually do.

I’d spent hours studying pictorial books on Egypt as a child from my parent’s small library, and today have my own collection with a replica of a winged statue of Isis in my bedroom because it’s a lovely familiar symbol to me.  Who knows what Nana’s specific life was like prior to the Egyptian burial tomb?   She could have been one of a few servants who died in the tomb or she could have been a man or a woman of some affluence or influence.  Perhaps I was with her.  The point was that she also had lived a particular Egyptian life and she wanted me to know that we continue living and experiencing life in infinite ways.

I was thankful to receive direct confirmation about past lives, and would go on to experience more guiding dreams and spiritual visitations from Nana as time passed.

Years later, when I entered the door to a deep spiritual journey that engaged the full spectrum of emotional, mental, physical, and spiritual levels through the course of battling Lyme disease, I began vividly remembering several features of past lives.   I was surprised and quite amazed to realize that specific past life episodes appeared to me for a reason:  to trigger memories and access helpful tools that I needed to help guide and strengthen me.  And they showed me the power of alliances and gifts down through my ongoing soul life – experiences and skills that I would remember, draw upon and utilize in my present life, and they also showed me some of those aspects that I was continuing to evolve in this life.

In the year 2000, I entered into a “relationship type” that would be my last of its type as a part of my soul journey experience.  I entered into an intimate committed relationship with a very nice man who had been a friend of mine for several years while I was living in New Mexico.  He was a part of a larger group of friends with common interests and social activities. One day he spoke to me about being drawn into deeper feelings and asked me if I would  be interested in exploring being a couple.   An old female part of me was compelled to, after all, I liked him very much, so I agreed to do what I felt I must be drawn to, which honestly felt like a déjà vu – as in, “Have I done this before?”

Several months passed, and I began to feel familiarly closed in, assigned to those silent and powerful roles that women and men fall into from the ancient whispers of society that prescribe women be relegated to certain tasks and behaviors and men to their own assignments.  That’s not all a bad thing; it just wasn’t what my life approaching mid-age was about.

And as a woman, my tendency was to serve – a role of helping to the point of empowering my mate over myself, and I was quite efficient at it.   I could anticipate other people’s needs pretty easily being an intuitive empath, which compounded this tendency, and which was no one’s challenge to overcome but my own.  It was my work to heal this on a soul level.   I was in the final throws of moving beyond this role type which I know I had lived in previous life experiences.  And one night, I was given the gift of confirmation I had asked for with direct clarification as to why he and I had almost completely jeopardized our friendship:

I was shown a vividly detailed dream of a past life scene with my partner.  We were inside a small wooden log cabin home with wooden floor planks.  We lived in open grassland country that was wild and beautiful.  It could have been between the late 18th to early 19th century.  There was a simple wooden table and chairs, a rocking chair, and a stone fireplace in the one main room that had a black iron stand and hook that held a cast iron cooking pot. There was a small bedroom to one side, and then there was what I knew to be a larder, a small walk- in windowless room where shelves of homemade canned goods were placed, dry goods and probably dried meats, etc…  He (my partner) was my husband and was sitting in the rocking chair while we talked.  I had been taking an inventory of the food in the larder, and was happy to announce we still had some honey on stock.

I was wearing a plain long dress that gathered at the waist with long sleeves. The skirt of the dress flowed out loosely to the bottom of my shoes, which were black.  My hair was long and pinned back into a chignon at the base of my neck.

My husband had been preparing a gun that looked like a long rifle or musket.  I knew he was going hunting, and followed him to the front door where I watched as he moved beyond the porch into the tall grass toward a lake in the distance where he would hunt for duck or geese.  As I watched the back side of him walk with the rifle over his shoulder, I saw he wore long pants with a very loose heavy white shirt that had wide sleeves.  His pants were tucked into a pair a long boots.  He wore suspenders that criss-crossed in the back and wore a wide-brimmed hat.

I felt safe and content in certain ways with that life.  I really liked and respected my husband..  But I also knew I was bored and restless.  In those times, most women’s roles were mainly defined to the home.    My role as a woman in this life however, was on course to move in other directions because my current path in soul growth was quite different…

Live in beauty and be well – Triza

Copyright © 2012 – All rights reserved.  Permission by author to copy articles in their entirety only