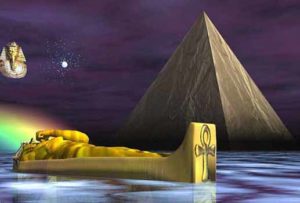 Dreaming and working with the messages of dreams has been around since any living soul has incarnated into a physical body – no matter what planet one lives on.  I also believe that spiritual beings that don’t physically incarnate also “dream” or envision anything instantly.   Our earth’s recorded ancient history of dreams, however, goes back as far as 5,000 years to 3100 B.C. when dreams where recorded on clay tablets by the Sumerians in Mesopotamia.  Kings, Gods, and high ranking peoples of those times paid close attention to the messages of dreams, which included leaving the body and traveling in other dimensions.

The Babylonians and Assyrians are considered the first to categorize dreams into good and bad ones.  Good dreams were believed to be sent from the gods or benign beings and ancestors, while bad dreams were from demons and anyone they believed were aligned with evil.

The ancient Egyptians took a great interest and devoted a significant part of life to dream work… They wrote their dreams down on papyrus dating back as far as 2000 B.C.  There were certain temples that were devoted to dreaming – a sort of spiritual healing and guiding facility where people could go sleep and receive messages from the gods to assist healing and receive guidance for specific concerns from their dreams.  There were actually priests and oracles or dream interpreters who held honored positions in Egyptian society.

The Egyptians were the first culture to create a “dream dictionary.” It was a small volume that contained nearly 200 messages from the gods, sent down through dreams.

The Ancient Greeks understanding about dreams was initially adopted from the Egyptians. They also believed that dreams were messages from the gods, goddesses or from the deceased. They used dreams to predict the future, solve problems, and determine what form of action was necessary. Dream interpreters were consulted when making military and political decisions.

Like the Egyptians, the Greeks also built dream temples for healing and guidance.  The dream temples became such an integral part of society that they were transformed into a healing temple or hospital.  For example, a person in need of healing would describe his or her dream to the temple priest, who would give his interpretation. Then, the person may spend time in prayer and ritual in preparation for healing.  It was not uncommon for the seeker to experience a powerful revelation or healing.

In the 5th century B.C., ideas about dreams and dream interpretation began to change. Rather than believing that dreams came from the gods, or from supernatural forces outside of one self, the Greeks started to focus the belief that dreams were entirely in the dreamer’s mind. This idea was first introduced by the Greek philosopher Heraclitus. Later, Plato added to the theory by proposing that dreams signaled a person’s mental state of mind and that they could show the dreamer how they were supposed to live their life.

Hippocrates, the founder of modern medicine, introduced the idea that dreams carried a diagnostic property that allowed the dreamer access the root of his/her ailment.

Indigenous peoples around the world have a deep spiritual connection with nature. Everything that exists in the natural world is connected and an extension of the divine, so is therefore, sacred. There are a variety of dream philosophies as there are tribes, yet there is a common thread that weaves throughout the world. They believe in alternate realities or dimensions.  Dreams are greatly valued and very useful information for the tribe such as medicines, guidance, premonitions and signs that come from dreams are shared with the tribe.  Both men and women shamans or medicine people are valued high members of any tribe and the facilitators of healings, rituals in preparations for rites of passage, vision quests, and other forms of spiritual guidance.

There are many quotes in ancient sacred texts.  Here are some examples from three.

“He had a dream, and behold, a ladder was set on the earth with its top reaching to heaven; and behold, the angels of God were ascending and descending on it.” (Jacob’s ladder)

“When Gideon came, behold, a man was relating a dream to his friend. And he said, “Behold, I had a dream; a loaf of barley bread was tumbling into the camp of Midian, and it came to the tent and struck it so that it fell, and turned it upside down so that the tent lay flat.” His friend replied, “This is nothing less than the sword of Gideon the son of Joash, a man of Israel; God has given Midian and all the camp into his hand.” When Gideon heard the account of the dream and its interpretation, he bowed in worship. He returned to the camp of Israel and said, “Arise, for the LORD has given the camp of Midian into your hands.”

“However, there is a God in heaven who reveals mysteries, and He has made known to King Nebuchadnezzar what will take place in the latter days.  This was your dream and the visions in your mind while on your bed.”

“I saw a dream and it made me fearful; and these fantasies as I lay on my bed and the visions in my mind kept alarming me.”

“Then the mystery was revealed to Daniel in a night vision. Then Daniel blessed the God of heaven;”

“And having been warned by God in a dream not to return to Herod, the magi left for their own country by another way”.

“Now when they had gone, behold, an angel of the Lord appeared to Joseph in a dream and said, Get up! Take the Child and His mother and flee to Egypt, and remain there until I tell you; for Herod is going to search for the Child to destroy Him.”

“While he was sitting on the judgment seat, his wife sent him a message, saying, “Have nothing to do with that righteous Man; for last night I suffered greatly in a dream because of Him.”

“All dreams are fulfilled according to how they are interpreted.”

“O my father! Verily, I saw (in a dream) eleven stars and the sun and the moon – I saw them prostrating themselves to me.” – Chapter 12, Verse 4

“Thus will your Lord choose you and teach you the interpretation of dreams (and other things) and perfect His Favour on you and on the offspring of Ya’qub (Jacob), as He perfected it on your fathers, Ibrahim (Abraham) and Ishaq (Isaac) aforetime! Verily, your Lord is All-Knowing, All-Wise.” Chapter 12, Verse 6

“No food will come to you (in wakefulness or in dream) as your provision, but I will inform (in wakefulness) its interpretation before it (the food) comes. This is of that which my Lord has taught me. Verily, I have abandoned the religion of a people that believe not in Allah and are disbelievers in the Hereafter (i.e. the Kan’anyyun of Egypt who were polytheists and used to worship sun and other false deities).” – Chapter 12, Verse 37

“And the king (of Egypt) said: “Verily, I saw (in a dream) seven fat cows, whom seven lean ones were devouring, and seven green ears of corn, and (seven) others dry. O notables! Explain to me my dream, if it be that you can interpret dreams.” – Chapter 12, Verse 43

“They said: “Mixed up false dreams and we are not skilled in the interpretation of dreams.” – Chapter 12, Verse 44

“(He said): “O Yusuf (Joseph), the man of truth! Explain to us (the dream) of seven fat cows whom seven lean ones were devouring, and of seven green ears of corn, and (seven) others dry, that I may return to the people, and that they may know.” – Chapter 12, Verse 46

“And he raised his parents to the throne and they fell down before him prostrate. And he said: “O my father! This is the interpretation of my dream aforetime! My Lord has made it come true! He was indeed good to me, when He took me out of the prison, and brought you (all here) out of the bedouin-life, after Shaitan (Satan) had sown enmity between me and my brothers. Certainly, my Lord is the Most Courteous and Kind unto whom He wills. Truly He! Only He is the All-Knowing, the All-Wise.” – Chapter 12, Verse 100

“My Lord! You have indeed bestowed on me of the sovereignty, and taught me something of the interpretation of dreams – the (Only) Creator of the heavens and the earth! You are my Wali (Protector, Helper, Supporter, Guardian, God, Lord.) in this world and in the Hereafter. Cause me to die as a Muslim (the one submitting to Your Will), and join me with the righteous.” – Chapter 12, Verse 101

Sigmund Freud was an Austrian neurologist and founder of psychoanalysis.  He was also considered the father of modern dream interpretation.  His psychological research revived the importance of dreams in mainstream culture.  Freud developed therapeutic techniques such as free association and transference.  He used dream work to help his patients recover from psychological problems and repressed childhood traumas.

His main theory was that dreams served the purpose of sexual or aggressive wish fulfillment.  In our waking lives, it is not safe to express some of our deepest sexual or aggressive desires, so we repress these desires and act them out in our dreams, which is a safe place for self-expression.  By analyzing a person’s dreams, Freud believed he could gain insight into their emotional life.  From this he added to his theory by stating that dreams were doorways of insight into previous emotional trauma – a ground breaker in bringing back what was lost from ancient times into our modern world.

Carl Jung was a Swiss psychiatrist and founder of the school of analytical psychology. He developed the concepts of the extroverted and introverted personality, archetypes, and the collective unconscious, especially in the exploration of dream analysis.  In Jung’s further work in spiritually connecting the unseen world of life to our physical waking life, he has in my opinion, brought us full circle to the belief that we are spiritual beings having a human experience.

He greatly expanded on Freud’s theories of dreams beyond the important sexual-familial implications.   He travelled throughout the world collecting dreams from people from all walks of life.  He deeply studied his own dreams and the dreams and hallucinations of his schizophrenic patients also.  Jung discovered that there are common themes throughout dreams – even from people in vastly different cultures, which is how the archetypes of dream symbols were organized.

These common themes were the basis of Jung’s theory of the Collective Unconscious and Archetypes. He noted two different types of dreams, Big and Little. The big dreams represented universal archetypes and the little dreams revealed personal insights, concerns, and history.  Jung was most interested in the big dreams as they were more vivid and spoke to a universal audience.

He also believed that dreams reminded us of our unconscious desires, wishes, and pieces of ourselves we had long forgotten. He believed that dreams were real messages and that if we want to live our most fulfilling lives, we had better pay attention to them and act on the information being communicated to us from our subconscious minds.

For more information about dreams in other cultures as well as Freud and Jung, here are some great reads:

Triza Schultz Copyright © 2017 – All rights reserved. Permission by author to copy articles in their entirety.