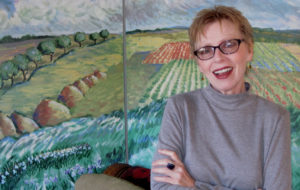 An intuitive (psychic) empath medium since childhood, I’m a clairvoyant, clairaudient, clairsentient, and I see and communicate with spirits and those who’ve crossed over from physical death. One of my great waking visions I vividly recall was at the age of 7. I was with my family visiting Mount Rushmore in South Dakota across the border from our hometown of Chadron, Nebraska. An easy trip on a warm summer day, and I was walking alone on a section of grassland, not far from my parents, on the historical site where The Battle of The Little Bighorn had begun. The sky was an azure blue with billowy clouds and my right arm was nestled in a sling supporting my shoulder as a result of a fractured collar bone. I felt a rumbling under my feet and instinctively bent down to listen to the earth. Suddenly, I witnessed a battle.

It was the thunder of the horses hooves I’d heard that were pounding the ground. I heard and saw the screaming of men and horses, the sounds of guns and arrows – all in a surround sound-like movie. As a little girl, I must have simply understood the earth was revealing it’s past to me. It didn’t frighten me. What I did walk away with from that experience was, clearly, no one wanted to participate in that battle, and there was nothing romantic or good about war, ever…

I’ve felt the presence of and have seen people and animals who have “crossed over” my entire life. I’ve always felt the residual energy of places and things, and can see past residual playbacks of intense energy episodes, as in the beginning battles of the Little Bighorn. To me, those intense energies are recorded in the earth until there is a deep cleansing and healing done. I’ve experienced mostly wonderful and also a few shadowy contacts with interdimensional or astral beings in out of body astral experiences. When I was 23 years old and visiting a friend whose brother was in the hospital and in a coma from a car accident, I felt the injured brother’s presence next to me telling me he was going to leave his body, and described how concerned he was about his family, especially his older brother who felt responsible for the accident. His family was so hopeful he would wake up. He passed within 2 days. I heard a cat’s voice cry out one morning from my home, and received a phone call from my father with the sad news that they had just put their beloved cat Reggie to sleep. These are a few examples of how I experience life. I absolutely know that we are all connected and never alone.

I grew up feeling overwhelmed at times, except when I was by myself, absorbing the feelings and energies of people, places and things. I knew my maternal grandmother was going to be the first in the family to cross over when I was a child; I just didn’t know when, and she was the first to leave her body when I was 21. I frequently knew who was calling on the phone, what people’s hidden feelings and motives were behind their actions, and continued having visions and spiritual/paranormal experiences in sometimes the most awkward of places, like an outdoor family barbecue where I observed an old Hopi woman in traditional dress and pinwheel arranged hair grinding corn on a stone grinder in the backyard of my cousin’s Tempe, Arizona yard while playing croquet. These types of visions are ordinary parts of my life.

My dreams can be of an epic nature. I’ve had detailed dreams of past lives and premonitions. Years after my grandmother Nana died, she appeared in a vivid dream to reveal a past life connection. She was wearing her little red tailored suit with the broach pinned near her heart that she was buried in, but the scene was dramatically different. She was laying on top of a raised stone pillar where a sarcophagus would be placed inside an ancient Egyptian burial chamber. There were flaming torches on the walls so I could see many of the burial treasures all around, including the hieroglyphics. I saw a statue of Anubis, a small canoe-like boat, beautiful vessels and statues of gold. It was her way of telling me she’d also had a life experience in an Egypt of long ago. It confirmed for me why I was so intrigued about Egypt as a young girl who poured through historical pictorial books on Egypt from my family’s small library. I’ve always felt so drawn to that cultural period of our earth’s history.

I realized that the symbology of Nana’s dream presentation to me was to confirm what I’ve come to know: We are all eternal spiritual beings who create and participate in an ongoing changing journey of growth, healing, and expansion, not just for the lessons, but for the pure joy of an infinitely diverse cosmic journey! Since that past life dream, I’ve encountered several different past lives of which were revealed to help me remember something that would assist me now. And that has absolutely been the case.

In 1972, at the age of 19, I experienced a life changing vision that occurred as a result of an experiment using a small amount of peyote with college friends in Tempe, Arizona. The experience catapulted me into a recognition or knowing that should have required the presence of a shaman to guide me because I was already such a spiritual sensitive, but being young and foolish, I didn’t know that I would open a door I was not fully prepared to comprehend or integrate. I didn’t know what a shaman was! What occurred were a series of downloads that I learned years later to describe as higher conscious illuminations: I knew that this dense world was what we made and there were other dimensions of life. I saw that we played out our illusions of fear and duality here and had amnesia about who we were. I saw us all as puppets, but didn’t understand until later that what I saw was that we are aspects of our higher soul. Aside from those crystallizations, through those experiences, I also knew that an aspect of each one of us was here to heal, learn and grow, but the greater part of us, our higher soul, resided in a higher spiritual dimension. We were being watched over and assisted on our earth journey not only by our higher soul, but by many others, such as beings from our soul group, angels and other spirit guides and master teachers.

Needless to say, I couldn’t begin to understand and process all that – but more, the intense knowing of the truth of it turned my world upside down. I felt I must have gone insane, and the most problematic thing was that I had no one to talk to who could help decipher and guide me. Back then, the words empath, psychic, and medium were relatively unheard of. I knew I was different, and that’s what scared the heck out of me. My body hurt for a year after that event. What did I do? I went about attempting to ignore my experiences and focused as far as I could into the material working world. But to no avail really, because I’ve always walked in two worlds. I managed to block much of the spiritual as many of us do, through more focus in the physical world. As a result, I catapulted myself into several difficult and heart-breaking life lessons that would eventually open me up again spiritually, polish and strengthen me.

I look back now and can lovingly understand that my fears and ignorance were based on societies assimilated patterns of fear of anything beyond the physical world – our amnesia. I simply, and desperately needed a wise metaphysical spiritual teacher. I strongly felt like I was going to die. I hadn’t realized that I had experienced a form of spiritual awakening and re-birth.

When I was ready to grow up and face myself, and at the age of 36 as the synchronicity of destiny’s opportunities would have it, I began connecting with the people, teachers, and books that would help guide me. I learned how meditation could help me focus and ground my gifts and energy, and began doing regular guided meditation group readings in 1992. I also began doing psychic medium readings in 1995 at the First Spiritualist Church in Denver, Colorado. I later began studying and practicing the divination art of Tarot as a tool to help stimulate, enhance, and direct my abilities.

I ended a 26 year professional corporate telecom human resources consulting career in 1997 to follow my path as a spiritual consultant/student, writer, and artistic creative. During that transition, I published my first book, “The Fear Standard – A Guide And Personal Journey to Regain Our Intuitive Spirit.” In 2005, I was diagnosed with Lyme disease. As I’ve navigated through this journey, I’ve come to realize the process of transformation as a gift and the medium from which many wonderful emotional, spiritual, and physical realizations have been distilled. I realized that the greatest pain one can endure is also the point of departure to the greatest love. Fear in all its many facets is truly a spiritual matter – and love has the final word.

My own extraordinary, deeply challenging, also humorous spiritual journey of discovery, healing, and growth has brought me here to you. It is my heart’s desire and privilege to assist you in creating the beauty, joy, love, and harmony you seek to live your purpose in your own sacred living space and to in turn share it with others.

In wonder, peace, and beauty ~ Triza