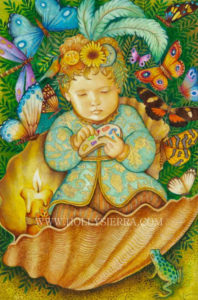 The archetype (pronounced, ahr-ki-type) was made famous by the Swiss psychiatrist Carl Jung, whose idea of universal images in dreams and myths could be used to interpret dreams.  He identified common themes for the basis of his theory of the Collective Unconscious, which refers to certain dream symbols that possess the same meaning for people universally.  Our dreams are certainly personal, yet our personal experiences often touch on universal themes and symbols which are believed to occur in every culture throughout history and being present in individual psyches the world over, such as the mother or father figure.  The Collective Unconscious dream archetypes show us that we are all spiritually and psychically connected.

The Persona is like our mask.  It represents our public image and what we present to the world as being our self in waking life.  In the dream world, the persona is represented by the Self.  The Self may or may not resemble us physically or may or may not behave as we would.  For example, the persona can appear as a scarecrow or a beggar in a dream. However, we still know that this “person” in your dream is us.

Although it begins as an archetype, by the time we have grown to realize it, it’s the part of us most distant from the collective unconscious.  As its best, it is the “good impression” we all wish to present as we fill the roles society requires of us – and more, what we want of ourselves.  But, it can also be the “false impression” we use to manipulate people’s opinions and behaviors.  And, at its worst, it can be mistaken, even by ourselves for our true nature – sometimes we believe we really are what we pretend to be.

The self regulates the psyche and facilitates the Individuation process (the process of seeking wholeness.)  It represents the totality of the psyche and the potential each of us has for becoming all that we can be in the development of higher consciousness.  In our dreams, the Self can appear as a mandala or beautiful art, gems, gold, the sun, pearls, and the stunning, powerful presence of a lion, a sunny summer day, or a beautiful house.  *

Jung’s formulation of the Self archetype is fundamental to all the other archetypes.  The Self has to be distinguished from the ego, which is the conscious mind that contains all the programs of limiting beliefs, attitudes, desires, and fears.  The Self is the fully integrated psyche where all opposing or conflicting elements become united. This unification includes the spiritual/physical and the feminine/masculine aspects of the Self.  It is important to remember what Jung describes about the relationship between the conscious and unconscious where the unconscious contains the opposite characteristics or capabilities of those that are evident as the conscious personality level. For example, if you consciously are an extrovert type, your unconscious will be introvert.

The final stage of Individuation, or also referred to as the Spiritual Philosopher’s Stone, is the purification process and attainment where the conscious and unconscious are joined and integrated into one harmonious whole.  Those aspects or parts of us that were previously opposites and in some degree of conflict are transformed into the whole Self.  This expanded, united consciousness is no longer an egotistical assortment of fears and self wishes, but instead a conscious, clear communion and love with the world.

*Note:  In dreams, there are several objects and people that can that symbolize different ASPECTS of the Self.  See the Dream Symbols page.

The Shadow is that part of us we don’t want to acknowledge because it is our darker nature.  It represents the rejected and repressed aspects of ourselves that are unconscious, unappealing, undeveloped, repressed and denied.  It is the part of us that we do not want the world to see.  It usually symbolizes weakness, fear, or anger.  It’s often a dark creature, frequently of the same gender as the dreamer, the dark stalker or pursuer, bully, drug addict, pervert, or murderer.  It is common for it to be a close friend or relative because their appearance often makes us angry or leaves us scared.  Consequently, it is a frightening figure in our dream.

The Shadow forces us to confront things that we don’t want to see or hear. We need to learn to accept the Shadow aspect of ourselves because its dream messages are for our healing, conscious awakening to truths, and for our highest good in order to make positive changes, even though it may not be immediately clear.  Confronting our Shadow aspect is a part of our spiritual journey that brings us into the light.

In dreams, the anima appears as a highly feminized figure, while the animus usually appears as a hyper masculine form. Or we might dream that we’re dressed in women’s clothing if we are male or grow a beard if we are female. These types of dream images appear depending on how well we are able to integrate the feminine and masculine qualities within ourselves. They function as a reminder that we must learn to acknowledge and express your masculine (be more assertive) or feminine side (be more feeling/intuitive).

Some symbols of the anima are the bear, cow, cat, tiger, a cave, water, the earth, and a ship.  All of those are more or less female figures.  With the exception of the mother figure, the dream symbols that represent our soul-image are usually of the opposite sex to the dreamer.  Thus, a man’s anima may be represented in the dreams by his sister; a woman’s animus by her brother.  Some symbols of the animus are an eagle, a bull, a lion, a snake, a mountain, phallus or other phallic figure such as a tower or spear.

The Divine Child is that delightful true aspect of our self in its purest form that deals with the efforts of growing up.  It is the archetype of the regenerative force that leads us toward wholeness.  It not only symbolizes our innocence, our sense of vulnerability, and our helplessness, but it represents our aspirations, full potential, and possesses great transformative power, as opposed to the limiting ego.  We are open to all possibilities.  In dreams, the Divine Child is represented by a baby or young child, and even baby animals, especially puppies (male aspect) and kittens (female aspect) as new aspects of a growing self.

The Wise Old Man /Woman represent the helper in our dreams that can lead us to higher levels of awareness as a primal source of growth with the potential to heal or destroy. They are the powerful, mature, wise teacher/way-shower, or authority figure that guides us in the right direction.  They can present unconditional love.

In dreams the Wise Old Man or Wise Old Woman can appear as a magician, doctor, priest or priestess, father or mother, teacher, grandmother or grandfather, goddess, queen or king, wizard, prophet, magician, doctor, guru or any other authority figure. Some examples of the Wise Old Man/Woman Archetype could be the wise woman Elf Galadriel in the Lord of the Rings, Gandalf in the Lord of the Rings, Obi-Wan Kenobi in Star Wars, Old Earth Mother, Fairy Godmother, King Arthur’s Merlin, or Professor Dumbledore in the Harry Potter book series, etc.

The Great Mother is essentially the nurturer who appears in our dreams as our own mother, grandmother, or other figure we would recognize as nurturing.   She provides us with positive reassurance, love, and protection.  There can be the negative side as well where the Great Mother might appear as an angry presence, jealous of our growth away from her such as a negative experience with our waking mother, or old bag lady, or bad witch, in which case they can be associated with seduction, and dominance control.

The Great Mother manifests herself in myth as always ambivalent and the archetype of feminine mystery and power that appears in many diverse forms. The Great Mother is also commonly regarded as a nature goddess, the recurrent theme of nature and motherly care do go hand in hand

The trickster is an important archetype in human history.   He is the wise fool whose antics can lead to transformation (often as a catalyst), but is also the least developed parts of our personality.  He’s a symbol of breaking the rules, but with ultimately positive effects.  It is he, through his creations that destroy, who points out the flaws in carefully constructed schemes – that may or may not work – plays with the Laws of the Universe and is sometimes his own worst enemy.  He plays jokes to keep us from taking ourselves too seriously.  The trickster may appear in our dreams when we have overreached, misjudged something, are experiencing conflict about a decision or about what direction we want to go in life.  He can make us feel quite uncomfortable, sometimes mocking or exposing our vulnerabilities, and can take on subtle forms, sometimes even changing shape in our dream.

The Trickster exists to question, to cause us to question and not accept things blindly.  He appears when a way of thinking becomes outmoded and needs to be torn down and built anew.

The White Rabbit in Lewis Carroll’s book, Alice’s Adventures in Wonderland, is a Trickster image who entices Alice to explore her unconscious and shadow sides of her personality, Robin Hood who stole from the rich to give to the poor, Prometheus who stole fire from the gods to give to humans, and in Native American lore the use of animals as tricksters, such as the coyote, raven, crow who are seen as creators of the world, Jesus who destroyed the money lender’s stands in the temple,  Dionysus, Greek God of wine, madness, and ecstasy – more than any other Greek God, he is associated with shape-shifting and taking on other identities, and Jack Sparrow character from Pirates of the Caribbean who used deceit and wit to attain his goals.

Other examples of the Trickster in dreams can be seen as:  The fool, fox, magician, clown, jester, villain, and the destroyer.

Triza Schultz Copyright © 2017 – All rights reserved. Permission by author to copy articles in their entirety.